This plant was the biggest happy surprise of last season for me. Many thanks to the grower at Holly Hill Farm who sold me on it at their annual seedling sale.

Dara is an ornamental also known as False Queen Anne’s lace, ornamental carrot, and wild carrot. In my garden, some of the initial flowers on this plant opened up into broad 5-inch blooms, ranging from white to purple-pink to dark purple. Flowers that bloomed later in the season tended to be smaller, though still around 3 inches in diameter. 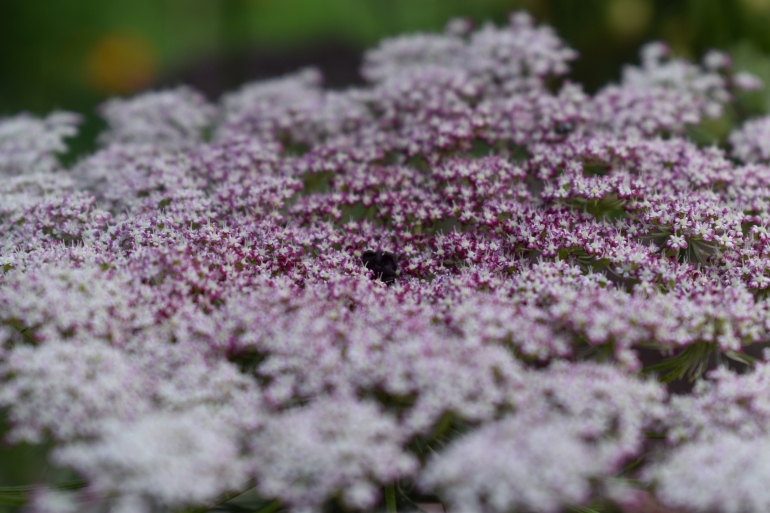 It’s not a fussy, formal flower. Here it is, mingling with some orange cosmos. I get a bit of shade in my garden, so the Dara grew on the tall side of the standard 36-50.”

Pollinators of all shapes and sizes loved the blooms, and I enjoyed the buzz they brought to the garden so much, I cut only a few of them for bouquets.

Generally, they are a long-lasting cut flower, but some of them drooped right away in the vase and never revived. I learned later from the book Floret Farm’s Cut Flower Garden (which by the way, for locals is currently available through Old Colony Library and Hoopla) that it’s best harvested “when flowers are fully opened and are lying flat.” Older blooms begin to curl up, like umbrellas caught in the wind.

I’ve read dueling information about whether this plant is a garden thug, perhaps because Queen Anne’s Lace, the white flower often seen growing in meadow’s ditches, and scrubby patches, is listed as a noxious weed in some states (not in MA). It might also be worth noting that Johnny’s Selected Seeds specifically calls this plant False Queen Anne’s Lace.

Expert gardener Ken Druse discusses his experience with Dara on the podcast A Way to Garden. Ken–who enjoys this flower, but does take care to contain it– says his self-sown Dara seeds sprout in summer in NJ, overwinter, and then flower the following summer.

Here in New England, Johnny’s Select Seeds calls them an annual and recommends direct-sowing them. I can vouch that the ones I purchased as seedlings sown in a six-cell pack in the spring established themselves fine in my garden and bloomed the same summer. Is it a thug here? I’ll find out this summer.

View all posts by suzanneperkinspark